What is ICO - Examining the Benefits and Risks Involved 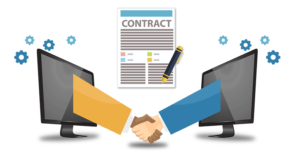 When Bitcoin first made its entry into the crypto world we experienced a fundamental shift of ideologies on traditional banking and finance. The underlying technology i.e. blockchain has created a completely new form of the currency market. What started as a platform to invest and trade cryptocurrencies became a distinguished financial market.

Now, we can not only trade currencies but also raise funds through the crypto market. It is seamless to raise capital for any blockchain based business using the funding practice, Initial Coin Offering (ICO). In this blog, we will explain the fundamentals of ICO in novice terms to help you better understand the concept and technology.

What is Initial Coin Offering?

Initial Coin Offering is a means to raise funds for a new cryptocurrency or blockchain based app. The ideator formulates a white paper that defines the scope of application and the method of distribution of the tokens. To fund the project the ownership of the application is distributed into tokens and these are exchanged for fiat money or other cryptocurrencies. If satisfactory funding is received than the project moves forwards else the money is automatically returned to the investors.

Once the plan is published a date is decided for the launch of IPO. This can be done in one-time investment or in stages. While the initial value of the token is decided by the initiator, the value later adjusts based on the market conditions. The concept of holding a crypto token is similar to holding shares of a company. The investor gains a stake in the project and can potentially reap high returns if the project is successful.

What Ethereum Brings to the Table?

Ethereum is a blockchain based platform that allows the seamless creation of crypto tokens. Instead of developing a blockchain from scratch, the developer can create their tokens based on the Ethereum blockchain. With the help of smart contracts, a relationship is established between the token of the venture and Ether. The price of a token in stated in terms of Ether (ETH) and funds are collected according to the standard procedure. The Ethereum contracts are based on the ERC #20 standards to ensure security.

Ethereum ICO led to huge gains to the investors. ETH was initially sold at 0.0005 Bitcoin and today it is worth 0.064 BTC. That is a profit of more of than 10,000%. The projects built over Ethereum also have huge potential. For instance, the Golem project was started to create a decentralized supercomputer to enable trade of computing power. The launch consisted of 82 million tokens that were sold for over 10,000 BTC. Today Golem’s market share is beyond 50,000 BTC.

The Risks Involved in ICO:

Most of the crypto projects don’t prove worthy of investment. Moreover, the entire process largely remains unregulated. Unlike IPO where a company raises money in form of a legal tender, an ICO is backed by cryptocurrencies. Though it is easier to launch an ICO due to almost non-existence of limitations, it exposes the investors to high risk. This is the reason why China has banned the practice altogether. The continues warnings issued by other governments also indicates that there could be regulations coming in future.

Though the risks involved in ICO is tremendous, the possibility of gains is equally high. You can call it as a high-risk, high-reward market. It is meant for adventurous investors who are looking for opportunities in uncertainties. Overall if you are planning to invest in an ICO then perform due diligence first. If you are planning to launch your startup using ICO then ensure that you are comfortable with the technology and the currency that will make your capital.

Have a Blockchain Project - Get in Touch:

NewGenApps strongly believes in making the best out of evolving technologies. It’s is our passion for innovative solutions that drive our business. Over a small period, we have created a strong in-house team of developers who have an in-depth knowledge of blockchain development. Contact us today to for a project discussion or consultation.