What is Blockchain Wallet and How does it work?

With the skyrocketing value, Cryptocurrencies are creating a stir. This has even lead to the demand for Blockchain wallets and crypto wallets which is increasing every day to become industry leading web wallets. According to the Statista, by the end of 2017, over 21 million users were reported to be making use of the wallets for transacting in digital currencies and to buy and sell bitcoin.

As these wallets are covered in an intuitive interface for users, they also have a compound functioning at the backend. This has actually resulted in curiosity in a number of people that how exactly these Blockchain powered wallets work, how safe are the transactions made with these wallets, how and where the digital currencies are stored in it, and so on. The list continues. So let's dig into what is a Blockchain wallet and segments which give insights and the aspects related to it. (types, security, development etc).

Did we got you interested? Then grab your fresh copy on Blockchain right here.

What are Blockchain Wallets?

A Blockchain (or cryptocurrency) wallet is a software program that basically allows users to buy, sell, send and receive and check balance for their digital currency (or assets) like Bitcoin wallets.  For the users who are involved in the exchange of Bitcoin, Ethereum, or other cryptocurrencies, then they must be using a Blockchain wallet of any type for real time transcactions.

Blockchain wallets do not save cryptocurrencies like the traditional wallet or bank account does. The record of all the transactions such as selling, buying, exchanging etc is kept by them. Actually, all the records related to the currency is stored in Blockchain mechanism.

How Do Blockchain Wallets work?

A private and public key for the transaction is saved in cryptocurrency wallet store. With multiple Blockchains there is interaction to authenticate a transaction, allowing users to purchase or sell one or several cryptocurrencies. But, what precisely happens in the backdrop that makes a secure, cryptocurrency transaction possible? Given below is the example which will provide a better understanding for this.

Example:  You can assume that someone has sent you some Bitcoin or any other digital currency. When the sender does this, he is actually assigning you the owner of that currency to the address of your Blockchain wallet. Now, for you to the private key in your wallet must match the public key that the currency is assigned so that you could spend those coins. When both the keys will match, the balance in your wallet will increase. In this process, the exchange of currency is not there but a transaction is committed, recorded on Blockchain, and the changes are then seen in the wallet.

Also Read: How can Blockchain & Bitcoin be the future of Money 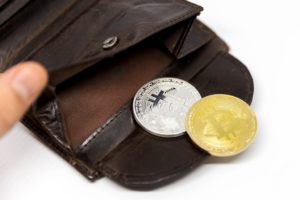 To store and reflect a transaction on Blockchains, there are three types of cryptocurrency wallets available. They are:-

These are software applications which can be downloaded on a device (either desktop or mobile) or accessed online. Depending on the type of device they are meant for, software wallets are further characterized as:

Desktop: These are wallets which can be downloaded on a PC or a laptop and can only be used from the system in which they are installed. If you don't focus on accessing the wallet anywhere then these software wallets are good to go.

Limit: Though desktop wallets are a safe choice, you should make sure that your system is protected against virus attacks (as a single susceptibility may make you lose the funds).

Online: You can access these wallets on any device(mobile, tablet, desktop) through a web browser. This is because these wallets run on the cloud.

Limit: It is a little unsafe option as the private keys for a transaction (in online wallets) are saved online and are controlled by the third party.

Mobile: These wallets provide anytime and anywhere access as they are available as a mobile app. Other than this it allows provides the ability to scan QR codes which facilitates easy and faster funds transfer. As there are a number of benefits which these mobile apps offer, mobile wallet development is famous amongst the three software wallet categories.

As there is no such system which is 100% secure, all you need to adopt is adequate security measures at your end if you are going for any of the three software wallets.

Also Read: Impact of Bitcoin on the Economy

The private key of users on a hardware device (like USB) is stored in Hardware wallets. There is compatibility by these wallets with various web interfaces and allows support to multiple cryptocurrencies. For making use of these wallets, you have to connect them to any internet-enabled device, enter pin, and confirm. Hardware wallets are the securest wallet options available as all currencies are stored offline

For paper wallets, the pair of keys (public and private) are generated using a software application and are then printed to make a transaction possible. Paper wallets generally work with software wallets for buying and selling of funds.

According to Wikipedia ‘, The number of cryptocurrencies available over the internet as of 7 January 2018 is over 1384 and growing.’

While Bitcoin still comprises of the biggest Blockchain network, Ripple, Ethereum, Litecoin, Carnado and other alt-coins are catching on to the users’ interest. If you or your customers need to work with multiple currencies for receiving or transferring funds, then there is no requirement of having a separate wallet for every currency. You can either choose a wallet that makes uses of the single currency or the one that offers use of multiple cryptocurrencies. Opting for a multi-currency wallet is indeed an enhanced and flexible choice.

How Do Blockchain Wallets Send Bitcoin?

To start with follow the example below and you will get the clarity of the process.

To summarise, in this condition, you and Zach are sending funds to each other directly; no one acts as a mediator. Those in the network validating the transaction are seeing data which is related to the code of the transaction. Your personal data or Zach’s personal information is not seen by them.

Also Read: Expert Voices on the Future of Blockchain

Blockchain Wallet Development: How to Make the Right Choice?

A Blockchain wallet is intended to simplify cryptocurrency exchange for users (which could be your client or customers)., A choice between software, hardware, and paper wallets can be made depending upon how frequent and big transactions are going to take place.

For example: If the intended audience regularly buys or sell multiple currencies, then choosing a mobile wallet is the most appropriate option. On the other hand, if your clients are sponsors (having made an investment in ICO tokens), who actually need to hold on the digital currency for a longer time, then the requirement will be met by hardware wallet. You actually need to take out time and access them for better results.