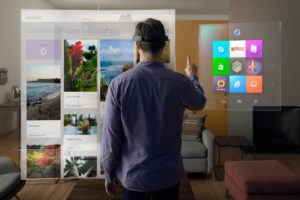 The past few years had been remarkable that brought continued growth and awareness to the worlds of Augmented, Mixed and Virtual Reality. Set to become an industry worth 165 billion USD by 2020, there still lies a confusion in understanding these reality concepts as a whole. So let’s figure more about Mixed Reality vs Augmented Reality for that matter of fact. But before that, we must dig in to know what these technologies actually mean.

Augmented Reality: What lies inside?

Imbibed from the word ‘augment’ which means to add or enhance something, Augmented Reality enriches the real world with digital information and media, such as 3D models and videos, overlaying them in a real-time camera view of the user’s device.

With a wide selection of Augmented Reality tools readily available in the market, it finds its application in a number of verticals, sales, marketing, retail, design are to name a few.

Now that you’ve got a grip of Augmented Reality, let’s see what Mixed Reality claims to offer.

Did Augmented Reality got you excited? Then grab your free copy right here.

Mixed Reality: What it claims to offer

Either employed as a standalone concept or used in a broad spectrum, Mixed Reality brings the best of both worlds and attempts to combine Virtual and Augmented Reality. When both real and artificial worlds are merged together, an entirely new environment and visualization become possible wherein physical and digital objects co-exist and interact in real time.

In Mixed Reality environments, users seem to navigate through both real and virtual spaces at the same time instead of residing in an entirely virtual world. In fact, virtual objects are hooked into the user’s real world and augment their real environment, making virtual interactions appearing to be real. MagicLeap for instance is doing a marvelous job in the mixed reality segment. It allows developers for content extraction and spatial browsing enabling 3-D exploration.

If we talk of the epitome of Mixed Reality, Microsoft’s Hololens needs a specific introduction. Microsoft brought disruption in the Mixed Reality space with their Hololens which is actually a self-contained holographic computer that enables users to interact with digital content around them. According to Microsoft, interacting with holograms in mixed reality enables users to visualize and work with their digital content as a part of their real world.

Even Skype came together with Microsoft’s Hololens for a better user experience altogether. If you are not sure how. Then watch this.

Mixed Reality (MR) can be mentioned as an enhanced form of Augmented Reality (AR). Let us understand like this. In Augmented Reality, like Google Glass or Yelp’s Monocle feature, the visible natural environment is overlaid with a layer of digital content.

But the case is slightly different with Mixed Reality, as virtual objects are integrated into and responsive to the real world. For instance, A virtual ball under your desk would be blocked from a user’s view unless he bends down to look at it.

Mixed Reality takes the best qualities of Augmented and Virtual Reality to create an immersive interface that overlays upon the user’s reality. Rather than displaying simple images like Augmented Reality, Mixed Reality strives to put fully digital objects that are trackable and intractable in the user’s environment. Users can actually view and manipulate things from different angles which is as complex as an anatomy model. This type of rendering demands more processing power than Augmented Reality, which is one main reason Mixed Reality applications and devices are still in the proof-of-concept phase and far from consumer availability.

Mixed Reality can be rendered as the next iteration to Augmented Reality as it offers better information and visualization.

Ideally speaking, technology will merge with one system, where users can seamlessly switch between completely virtual environments to their own spaces that are augmented. Both Mixed and Augmented Reality have much more to deliver than this, but the developers need to come up with new devices and applications.

Have a project in head? Then reach out to us for a consultation.